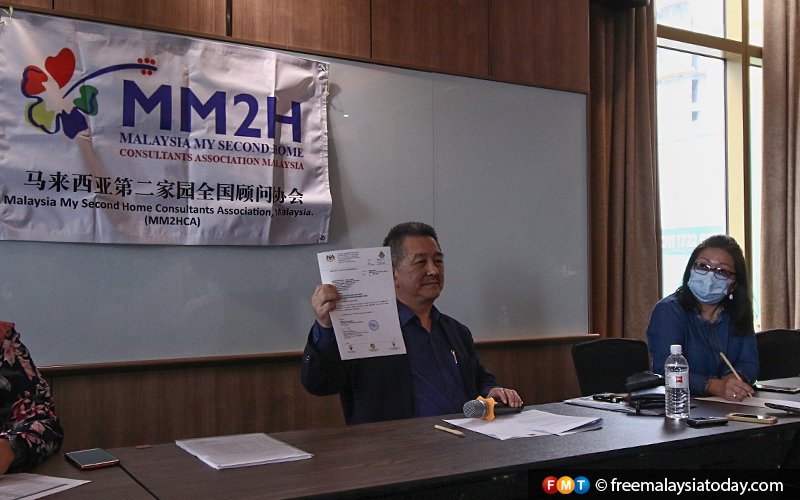 KUALA LUMPUR: An association representing Malaysia My Second Home (MM2H) consultants has appealed for greater clarity from the government after being left in the dark about the 90% rejection rate in recent applications.

The president of the MM2H Consultants Association, Lim Kok Sai, today said that around 1,000 applications were rejected from September to November 2019 in the latest batch of results made available from June 25 onwards.

The usual rejection rate for the MM2H programme — which was established in 2002 and allows foreigners to stay in Malaysia for a period of 10 years — averages at around 10% annually.

Speaking at a press conference here today, Lim said his members are hoping for a “fair and reasonable” explanation as to why such a large number of applications were rejected, especially with the rigorous application process, meaning incomplete applications are immediately turned away at MM2H offices.

“Our members were surprised to receive a large number of rejections from the tourism, arts and culture ministry without any reason or comment, stating that the (rejected applications) could not be appealed,” said Lim.

“We have written to the ministry several times but there has been no answer yet. Maybe they are arranging for a proper time to meet us.

“We are in a bad position as we don’t know how to answer the applicants. Please tell us what these applications lack. We are prepared to get whatever documents required and resubmit the applications.

“One application who was rejected had already bought a house here costing RM3.3 million,” he said, adding that Malaysia’s reputation would also be tarnished by the lack of transparency surrounding these rejections.

Tourism, Arts and Culture Minister Nancy Shukri, at a press conference in Kuching today, said the MM2H programme was now frozen for review and further improvements.

She said the government will not cancel the programme as it brought economic benefits to the country.

The MM2H scheme has brought in RM40.6 billion in total from its introduction in 2002 until 2018, and Lim estimated that Malaysia would have lost at least RM776 million from the latest batch of rejections.

MM2H statistics show that 5,610 applications were approved in 2018, which benefited the country’s various sectors and industries by RM4.4 billion.

Apart from boosting the property sector, the MM2H programme also pumps money into banks through compulsory fixed deposits of either RM150,000 (for applicants aged 50 and above) or RM300,000 (applicants below 50).

Applicants also have to undergo mandatory medical checks and buy medical insurance. In addition, a large number of them also chose to join the program due to Malaysia’s reputation as a shopping destination, food haven and an education hub.

Noting that the MM2H Centre in Putrajaya is “temporarily closed”, Lim said this may be due to a new statement by the Immigration Department that it will handle all matters related to the MM2H programme.

Immigration Department director-general Khairul Dzaimee Daud yesterday said all parties with MM2H matters to attend to would need to go to its headquarters in Putrajaya, a move which Lim welcomed.

“I’m sure it is to help with administration and make the application process more effective,” said Lim.

“Some of the documentation and approvals, like the 10-year visas, have to be done at the (immigration) headquarters.

“Immigration officers have always been very cooperative and helpful, and I would like to take this opportunity to thank them.

“They work very hard for us… Sometimes they don’t even have time to eat lunch.”